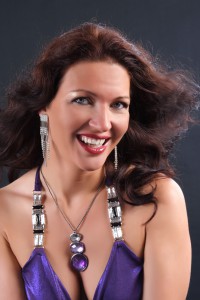 Passion is guaranteed when it comes to Viktoria Vizin, the internationally acclaimed mezzo-soprano whose name is often seen in the world’s most prestigious houses such as the Metropolitan Opera, Hungarian State Opera House or Royal Opera House Covent Garden.

Ms. Vizin has embarked on an exciting dramatic mezzo-soprano repertory in her past five seasons. This includes Charlotte in Werther (Scottish Opera debut 2013), The Composer in Ariadne auf Naxos (Budapest 2013, 2015), Phedre in Rameau’s Hypolite et Aricie, Dejanira in Handel’s Hercules (Budapest 2012 and 2013), the Wagner Ring Cycle at the Luzerne Festival conducted by Jonathan Nott (2013). Ms. Vizin sang the highly acclaimed supporting roles Flosshilde (Das Rheingold, Gotterdammerung), 1st Norn (Gotterdammerung) and Schwertleite (Die Walkure) and Waltraute in Götterdämmerung (Palermo) directed by Graham Vick. In addition to her new repertory, she completed her 100th Carmen performance (2012) at the Budapest State Opera House, performed Judit in Bluebeard’s Castle in the Miskolc International Opera Festival (2013) and with the Oregon Symphony (2016), made her appearance at the Grand Theatre du Luxembourg as Preziosilla (2013) and had her Danish debut at Den Jyske Opera, Aarhus as Dulcinee (2014).

Ms. Vizin had a role debut of Hannah Glavary in The Merry Widow at the BartokPlusz Opera Festival in Hungary (2014, 2015) and sang the title role of Tosca in Hungary (2015-16). She debuted as Nerone in Monteverdi’s Incoronazione di Poppea at Palace of Arts, Budapest (2015).

In addition to her operatic performances Ms. Vizin has appeared as the alto solo of Beethoven’s Ninth Symphony (Krannert Center for Performing Arts – Champaign, IL), the alto solo of Handel’s Messiah (Palace of the Arts MUPA, Hungary), a Verdi Gala where she performed the aria: O don fatale and appeared in Den Jyske Opera’s 2014/2015 operatic season’s Opera gala in Opera i Rebild performing various arias and duets such as Alza!, Smanie implacabili, Habanera and the Barcarole and she sang at the Roy Thompson Hall in Toronto and was part of the Opening Gala of Opera of the Nature Opera Festival (2017 Lake Tisza, Hungary).

In season 20/21 Viktoria has been invited to Brussels and Munich with the legendary conductor Peter Eötvös to perform a demanding program by Bela Bartok.