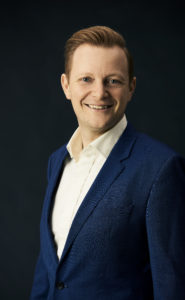 Since 2011 he has been working freelance all around the globe. His work in Denmark includes regular invitations to perform at The Royal Opera in Copenhagen and various roles at the Danish National Opera, Operaen i Midten, Aarhus Sommeropera, Opera Hedeland and Den Fynske Opera.

His repertoire spans parts such as Guglielmo in COSI FAN TUTTE, Danilo in THE MERRY WIDOW, Marcello and Schaunard in LA BOHEME, Morales in CARMEN, Bob in Menottis THE OLD MAID AND THE THIEF and Il Conte in LE NOZZE DI FIGARO.

He has also performed in several contemporary operas and several Danish composers have composed roles specially for him.

In 2013 he was appointed resident Carl Nielsen Artist by Odense Symphony Orchestra singing Nielsens 3rd symphony ”Espansiva” and a number of recitals with Nielsens songs, broadcasted live on Danish Radio. This led to concerts in New York, Berlin and the Philippines.

Recent and future highlights include Grev Danilo in DEN GLADE ENKE, the title role in DON GIOVANNI and Dandini in LA CENERENTOLA and concerts with both Odense and Aarhus Symphony Orchestra.

Thomas Storm studied at the Opera Academy at The Royal Opera House in Copenhagen in 2011. Even before finishing his studies he sang Morales in Carmen, and Schaunard in La Bohéme.